Radix and Gemini joined as musicians.

Randy joined as a coder/graphician/designer/all-round-nice-guy!

Slash went to Gerp 2013 together with Randy/Hoaxers^Relapse, Deadguy/Up Rough, Wasp/Powerline and Gemini. Slash entered the Amiga music compo with Droid.

Oldtime iNSANE member Notorious rejoined as a coder/musician. Or was reactivated as he never left as far as he knows. 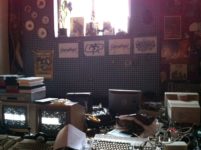 Slash went to Compusphere 2012 and entered the combined music compo with two modules. Like The Eighties which ended up at 2nd place by Vedder and Slash and C-Comp by Slash alone which gave him a 5th place out of 9. We beat several multichannel and mp3 songs with our 4 channel mods.